Shamshiri sunflower seeds and Kale Gochi Khoi are one of the most popular seeds consumed in Iran, and Otana has been producing and packaging the best varieties of these seeds for years. In addition to Iranian sunflower seeds, non-Iranian white sunflower seeds have also gained special popularity among Iranian consumers for several years. Otana offers these white, non-Iranian seeds in three flavors: salty (named #Saltina), lemon flavoured (named #Limona) and lemon-pepper flavoured (named #Limonahat). 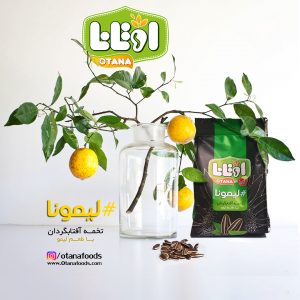 The special processing method invented by Otana along with the use of the best European flavorings has created a unique taste for the two products Lemona and Limonahat.

Among the properties of pumpkin seeds, we can mention the protection of bones and the immune system due to being rich in zinc and magnesium, anti-depressant properties and reducing problems caused by prostate enlargement. In this group of products, pumpkin seeds are also produced and sold in the form of salt-free roasts, just like the pistachio products group.

Jabani seed is processed from a type of watermelon that has many seeds inside and is known as “nutty watermelon”. There is a difference of opinion regarding the origin of this seed.

One theory suggests that the origin of the Jabani seed is the city of Jaban or Jabon (near Damavand, Iran). “Jaban” is the name of the place where Shah Ismail fought with Farrokh Yasar. In another story, its origin is mentioned in one of the old settlements of Sabzevar, “Jupan” or Goyan and Joyan, which is the current Jovin, Iran. Red watermelon seed (or Jabani seed) is rich in unsaturated fatty acids that cause detoxification, elasticity and freshness of the skin and is very useful for cardiovascular health. This seed is also one of the good sources of tryptophan amino acid (building blocks of protein). Tryptophan helps to induce comfortable sleep, as a non-medicinal substance, it plays a role in the treatment of depression and reduces nervous headaches (migraine).

Watermelon seeds, which are obtained from a kind of watermelon with a dark green skin and a completely round shape, called Mahboobi watermelon in Persian, are rich in magnesium. This micronutrient affect on regulating the metabolism of carbohydrates and sugars, leading to blood sugar control in diabetics.

Watermelon seeds are a suitable natural substitute for vitamin B complex tablets because they are rich in thiamin (B1), riboflavin (B2), niacin (B3), pantothenic acid (B5), pyridoxine (B6) and folate. Also, due to containing the amino acid arginine, it is proper for regulating blood pressure and preventing heart diseases; Because arginine prevents blood vessels from narrowing.

Coming up, Otana seeds are presented in their different weights and packages.